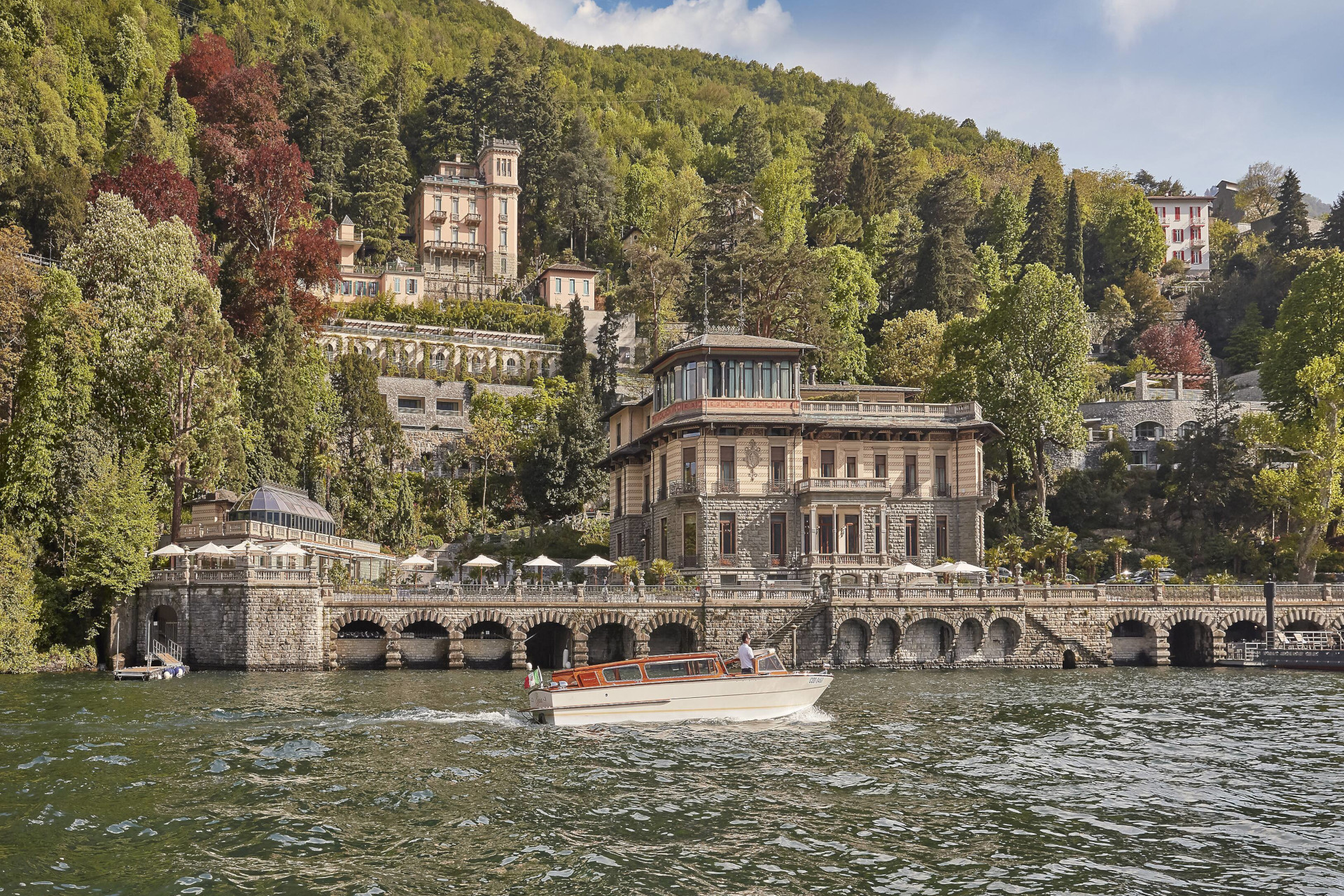 Set against the foothills of the Alps, Lake Como in Italy is the perfect spot for a summer vacation. Mary Lussiana shares how to make the most of your visit.

Glorious Lake Como, its deep blue waters surrounded by lavish 18th century palaces, exudes a charming timelessness that pulls in the crowds year after year. Some will come for its history; to imagine Rossini and Bellini composing on its banks or Frans Liszt who wrote of it ‘I do not know of any place which is more demonstrably blessed by heaven.’ Others come for its food, its little trattorias serving plump, lemon ravioli or its grand restaurants where you can sit on flower-filled, leafy, terraces at the water’s edge and indulge in the freshest of lake fish. Then there is the joy of being out on the water, wind blowing in your hair, a goblet of champagne in your hand and an exhilarating sense of freedom as you ride up and down the inverted Y. ‘A man’, the locals call the lake, ‘un Uomo’ with one foot in Como, the other in Lecco and his seat in Bellagio. 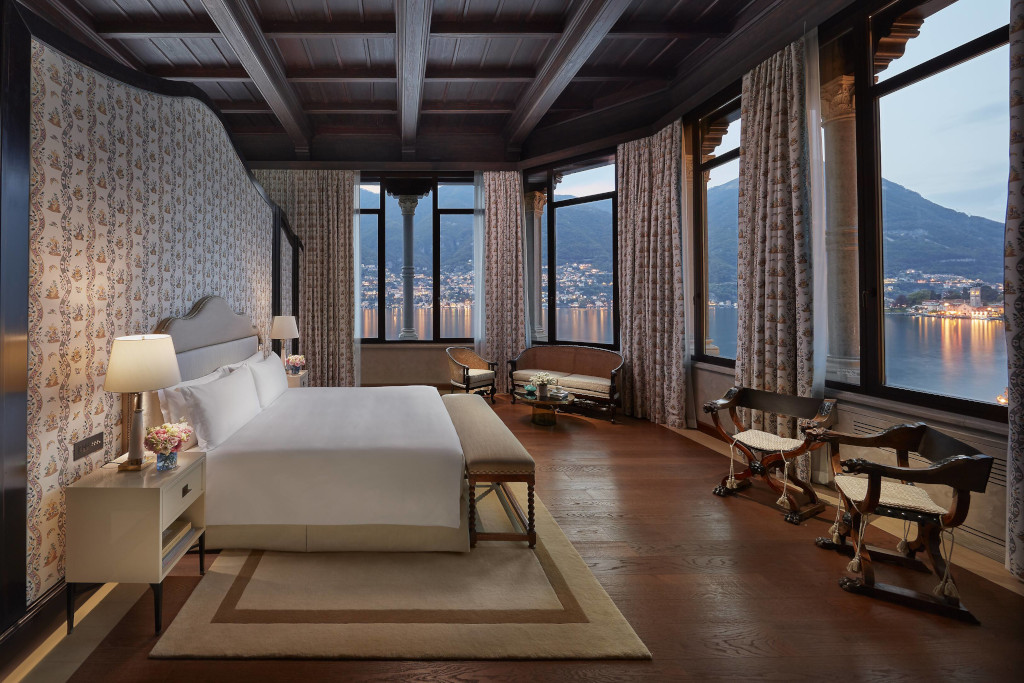 Mandarin Oriental, Lago di Como is the latest luxury hotel to open on the shores of Lake Como. At its heart is the 18th century Villa Roccabruna which was once was the home of Italian soprano Giuditta Pasta. The ancient Lebanese cedar under which Giuditta Pasta sang for Bellini, who lived on the other side of the lake, still stands on its lawn. A botanical garden runs down to the waterside. The villa itself is designed in eclectic Renaissance style with sgraffito walls. Interiors by designer Eric Egan are impressive; original chinoiserie is paired with bespoke Fromental wallpaper in the Sala Mandarin whilst the CO.MO Bistrot has gilded, stuccoed, ceilings above Fortuny wallpaper. There is also a spa and a gourmet restaurant, L’Aria, whose dishes are a culinary marriage of the best of Italy and Japan and where breakfasts on the terrace in the garden in the morning consist of such delights as smoked salmon with avocado toast, poached egg and black summer truffle. But CO.MO Bistrot is not to be missed if only for its ravioli filled with squid and its memorable tonnarelli cacio e pepe. Seventy-three suites and villas are scattered through the gardens; ours had a huge terrace with sweeping views over the soft blue waters and a swimming pool beneath, moored to the hotel and gently bobbing invitingly in the lake. 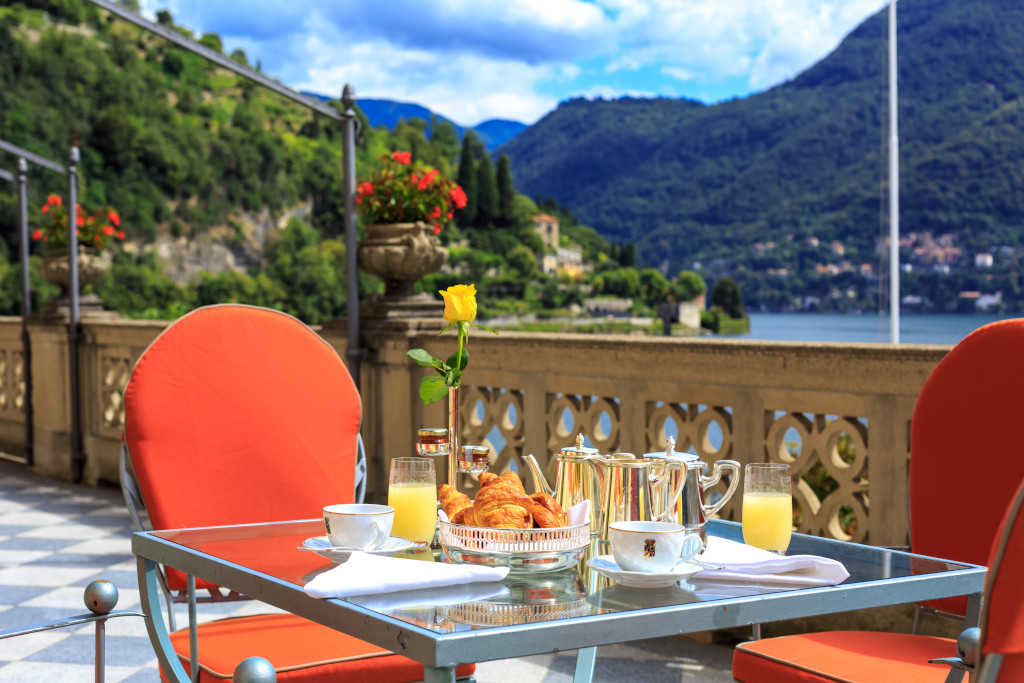 An embarrassment of culinary riches awaits the visitor to Lake Como. Apart from the normal enticing Italian pasta like the buttery lemon ravioli at the tiny Locanda Tirlindana in the charming waterside village of Sala Comacina, there are also the deliciously fresh lake perch, traditionally dipped in flour and pan fried with sage and found all around the lake. But there is haute cuisine here too. Treat yourself to a dreamy lunch on the stone terrace of Grande Dame Villa D’Este. Here perch fillets from the lake come with a memorable wood sorrel flavoured risotto but not to be missed either is the Fassona beef tartare, with creamy egg, roman lettuce and focaccia crumble.  The lake’s other Grand Dame is the Grand Hotel Tremezzo which serves a menu paying homage to the great culinary maestro Gualtiero Marchesi. Try his signature rice, gold and saffron or his tribute to Jackson Pollock; squid and wolffish with four Italian sauces. More gourmet fare can be found at the sleek, contemporary, Il Sereno (which this year launched a new Penthouse Suite) in their restaurant which hangs over the water. Their Chef Raffaele Lenzi surprises with combinations such as wasabi marshmallow and peach kombucha. Save room though for the excellent Feel Como Restaurant in the town of Como itself where young chef Federico Beretta dazzles with dishes like linguine with sour butter.

Dip into Bellagio, the lake’s main town to browse their many silk collections, an important industry on the lake and a pretty town to explore with its endless cobbled lanes. Whilst there Visit Villa Serbelloni Park where from its lush gardens you can overlook the two branches of the lake and Villa Melzi, famous for its botanical gardens and its display of azaleas and gigantic rhododendrons. There is an impressive choice of stately homes to visit or just take in from the waters. Every boat driver seems to slow down when passing 18th century Villa Oleandra, now home to George Clooney and a popular figure among the locals on the lake, but to get a feel for the palatial interiors of the day head to Villa Balbianella. Built at the end of the 18th century, it has many period antiques as well an upper floor dedicated to Guido Monzino, the leader of the first Italian expedition to Everest.

Silk is an obvious souvenir to bring back. Go to one of the well-established Incomo shops in Como which have been specialising in silk scarves for over 30 years. But try the local food shops too for delicious local olive oils; Vanini is a good one. For scents to transport you back to the shimmering waters from rainy England try Acqua del Lario. In their little shop in Torno they have a range of diffusers and uplifting fragrances named after towns around the lake. For children a fun game to bring back is Il Gioco dell’Oco (the goose around the lake) a simple board game where the goose travels around Lake Como’s landmarks. It is produced by Editrice Lariologo and easily found in one of the many bookstores. 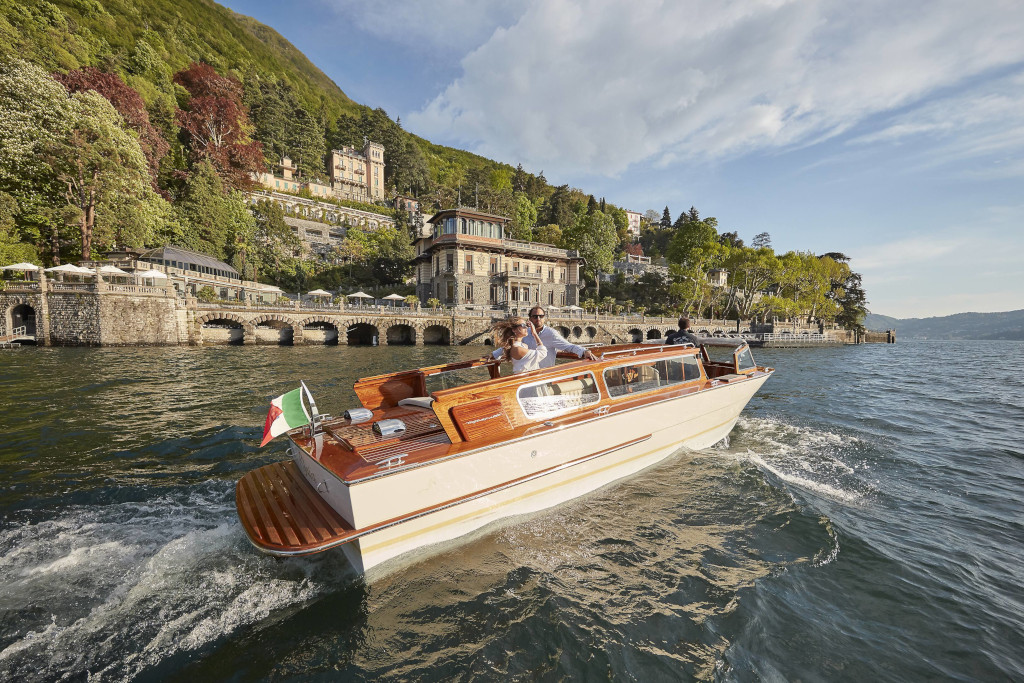 Book Lake Como’s Best for a boat tour. The charming Attilio Benzoni will pick you up in his polished wooden Venetian ‘limousine’ with its spacious sundeck and give you a really good over view of the lake as well as share his insider knowledge to take you to the best off the beaten track trattorias. Do save a day to explore Villa Erba, a 19th century manor house on the shores of the lake. It was used in the filming of Ocean’s Twelve as well as Netflix’s Murder Mystery with Jennifer Aniston and Adam Sandler.

Fly to Milan Malpensa airport and hire a car to take you the 90 minutes to Lake Como.

More from the Weekender Series: